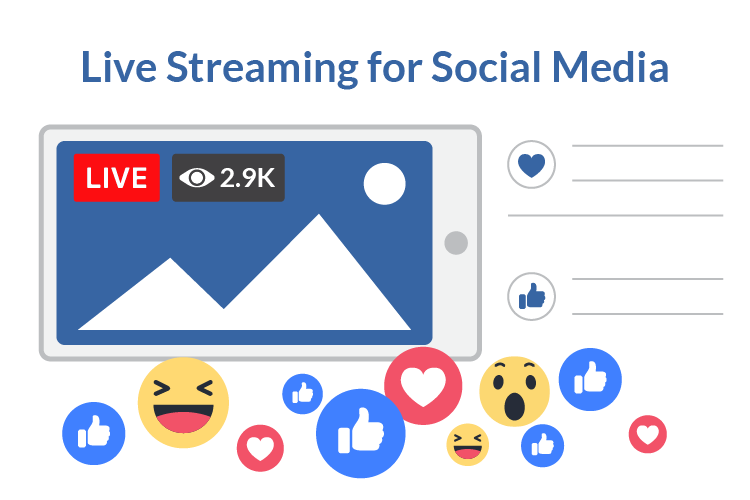 You have something big to reveal. A press conference or major announcement is always a good reason to go live.

Something exciting is happening, like an event. Share the excitement and entice people to come by going live! That said, if you are presenting a professional live performance such as a concert, make sure you are contractually allowed to broadcast live video – many such contracts expressly prohibit you from doing so unless permission has been granted in writing.

You have something special to show. Live videos can be used to get potential customers interested in what you have to offer. A couple of quick examples: humane societies sometimes show live videos of adorable, adoptable animals; a manufacturer might show a live video of a particularly interesting process; a designer might showcase the newest collection.

Behind-the-scenes, product demonstrations, and how-tos are all ideas for live content.

What are the advantages of going live?

Viewers’ expectations are lower for live videos than produced ones. Obviously, if you have a good camera and microphone, that’s great – but many live videos are posted from mobile phones. Viewers understand that they’re watching raw, unedited footage, and adjust their expectations in terms of production quality accordingly. So going live represents an opportunity to use video in your marketing, even if you don’t have time or capability to produce a more polished video.

Going live is easy to do. All you need is something worth showing live, and a decent mobile phone. If you have a tripod or other equipment to improve your live shot, that’s even better.

You get great feedback from live videos. Because live videos are so engaging, your viewers are likely to provide feedback – which means you can gain insight into what your customers want.

How can you go live effectively?

We’ll discuss going live on the various social media in more detail below, but here are some general tips as to how to use the technique effectively.

Make sure you have something worth going live for. You don’t want to disappoint your page followers, or make them tune you out!

Promote that you’re going live. Make sure your audience knows you’re planning to go live so they can tune in. Use all the channels available to you – including your blog, your e-newsletter, and all social media channels you use.

Practice makes perfect. Plan your broadcast carefully. If possible, it’s a good idea to stage a run-through of whatever you’re planning to present live. Make sure anyone who’s going to appear on camera has prepared for the role, and give them a “cheat sheet” of talking points they can refer to if they get stuck while the camera’s rolling.

Check your connection. Streaming a live video requires a fairly robust internet connection. You don’t want your video to drop just as you’re getting to the exciting part! You might try testing the strength of the connection by broadcasting on your personal profile, and making sure it’s working well.

Facebook live videos can be broadcast from personal pages, in a group, in a Facebook event, or on your Facebook Page. Obviously, for most business purposes, your Facebook Page is the most appropriate place from which to originate your video.

You can create a live video from your mobile phone – just open the Facebook Page Manager application, and tap the video camera. You’ll be filming directly from your phone, so try to keep it steady! An inexpensive tripod can be a good investment if you plan to go live with any frequency.

If you have access to better equipment, it’s also possible to use a camera and microphone and broadcast from your desktop.

No matter what equipment you use, you can broadcast live for up to four hours. It’s best to start your broadcast at least a few minutes before the exciting part starts, so that your fans have the chance to join the broadcast. They can then like, share, and comment on the video in real time. During the video, viewers can tap “subscribe” to get a notification the next time you go live – if you plan to broadcast live frequently, encourage your viewers to do just that.

To end the broadcast, just press “finish.” Then choose “save,” and your live broadcast will then be accessible on your Page as a video. It will drop down into its appropriate chronological spot on your timeline.

You can also edit your video once it’s completed and posted. Click on the date of the post in your timeline and select “edit.” From there, you’ll be able to choose a thumbnail image, select a category for your video, and add a call to action.

In 2018 Facebook rolled out a new feature, Facebook Premiere, which has many of the benefits of going live – without the limitations and unpredictability of live broadcasting. Essentially, Facebook Premiere lets you schedule the debut, or premiere, of a video – and then promotes the premiere to your fans, when people can then interact with it as if it were live.

With Facebook Premiere, you upload the video into your Page and schedule it. But the difference between Premiere and an ordinary scheduled post is that your fans get a notification that you’ve scheduled a premiere and have the opportunity to subscribe to notifications on it. They’ll see a fun countdown clock for the last three minutes before the premiere. When the Premiere actually occurs, viewers interact with it as they would a live video, by liking, sharing and commenting in real time.

Facebook Premiere should be used when you have something big to announce, and the hype is justified. For Premiere, you should use a more polished video, as opposed to the raw, unedited footage of a live video.

Going live on Instagram is also easy. As Instagram is almost exclusively mobile, Instagram live videos are shot on mobile phones. You simply open the app, press “live,” and off you go! Friends and followers who are online will receive a notification that you have gone live, and will see a live badge over your profile picture at the top of the feed. You can use face filters (a funny feature borrowed from Snapchat) to spice up the broadcast.

Conclude the broadcast by tapping “end,” and you can either choose to share the video to your Instagram Story (where it will be visible for 24 hours) or simply discard it.

The various social media often co-opt each other’s best features in an attempt to compete. The ability to go live is no exception – Facebook added the feature in 2016, and by January 2017 Twitter had followed suit.

To go live on Twitter, tap the camera icon on the composer, and tap “live.” End the broadcast by pressing the “stop” button on the top left. In late 2018, Twitter added the capability of going live with audio only, as a sort of mini-podcast. Choose the microphone rather than the camera icon for this option.

By Shelley Johansson. Read about Shelley on our Meet Our Staff page.