What Makes an Effective Logo Design

A logo guides the appearance of all your marketing materials – from signage to collateral to website – and is the cornerstone of your brand. That’s why creating a logo is one of the most challenging and interesting tasks a graphic designer can undertake.

Think about well-known logos, national logos, logos that have stood the test of time. You’ll notice they have certain qualities in common, including:

Timeless. Unless being trendy is a critical part of a company’s brand message, good logos are not so cutting edge that they’re likely to become dated quickly. But like anything else related to design, logos can still become dated, despite designers’ best attempts to choose typefaces and other design elements that are timeless.

Conceptual. Logos should visually represent or symbolize something about your company, without necessarily being literal about it. All elements of the design, from the color scheme to the design of the mark to choice of typeface, are intentional choices made to represent your company’s brand message. Your designer should explain how these choices fit your company.

Versatile enough to work well in a variety of formats. Versatility is a key attribute of an effective logo. Your logo needs to work well in a horizontal format, vertically, in a small square for digital formats like a profile image – and in black and white and color, on a dark background or on white. It should look good embroidered on a baseball cap, printed on stationery, or rendered in a website. Some logos have a horizontal and a vertical version. Sometimes the mark is reproduced without accompanying typography.

Memorable. Some logos are too cliched in what they depict, or look too much like everyone else’s logo.

If a company is new and has no existing logo, obviously your designer is starting from scratch and has a wide range of choices in color, design, look and feel. This is also true when a company is rebranding – that is, getting rid of an existing corporate identity that isn’t working for the company – in favor of a completely new look. The choice of colors and design look/feel will be guided by your brand personality and the audience you’re trying to reach, and your designer will talk with you extensively before attempting a design. Simply put, the color palette and typeface Prime might choose for, say, a financial advising firm will be very different than those appropriate for a skateboard retailer.

Other times, clients come to us for a “logo refresh,” that is, the modernization of an existing logo by adjusting the mark’s design and/or typography. After all, most people can make a pretty good guess what decade an advertisement is from by the typography alone – it makes sense that logos sometimes need an update too. Nationally-known brands that have undergone some form of logo refresh in recent years include Pepsi, Starbucks, Burger King, MasterCard, Toyota, even the NFL. Sometimes these changes are so subtle they’re hard to notice unless you’re comparing the old and new versions of the logos side by side, other times the changes are more obvious.

One advantage of a logo refresh is that it builds on many years of established branding. From a practical standpoint, logo refreshes are generally subtle enough that you can continue using existing printed collateral (such as stationery, business cards, folders, etc.) and phase the new logo in over time, without the expense of reprinting everything at once.

The decision of whether to rebrand or simply refresh an existing logo depends on a variety of factors, including:

If you’re unsure, discuss your options with your designer.

Here’s an example of a logo design project that Prime completed for the Lee Initiatives Health & Wellness Endowment, which carries on the legacy of the former Lee Hospital in downtown Johnstown through philanthropy and community involvement. This was a complete rebranding project – there was no existing brand identity. 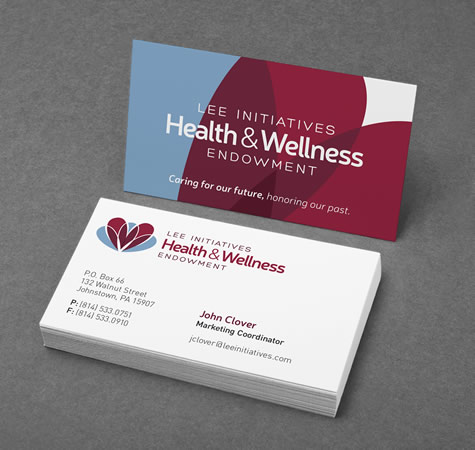 The Lee Initiatives Health & Wellness Endowment logo had two important messages to communicate. Most importantly, it needed to show that the endowment was an initiative to improve care facilities. Care is the core principle of the endowment. It also needed to show that though Lee Initiatives is a singular organization, the goal of the endowment is to reach out to care facilities all around the region to improve the lives of those they serve.

Lee did not have a color scheme in mind, or an existing logo to refresh. We developed three logos and presented them for review, including color schemes. All three presented the ideas of care and growth in some way.

The final logo, #2, used two concepts to represent the ideas. The primary shape of the logo is a a blooming flower, representing life and growth. Tucked neatly in the center of the mark is a heart, a traditional symbol of care and compassion — thus, showing Lee Initiatives at the center of communal growth.

After the logo design was selected and refined, Prime created a corporate identity package consistent with the new branding, using the shapes and colors of the flower petals for the entire package.

Our Mother of Sorrows (OMOS), a large Catholic church in Johnstown that recently celebrated its centennial, asked for our help in refreshing their existing logo. Church leaders felt the mark, which had been in use since the early 1990s, represented the church and its values well, but that it wasn’t as versatile as it could be — it was not suitable for use in formats like a social media profile image, and was hard to adapt for use in different orientations. In addition, the church wanted to the logo to better represent OMOS as a modern, vibrant, active parish. They asked us to find a way to modernize it while keeping the color scheme and the basic mark.

Here is the original logo:

Here are the refreshed logos:

We refreshed the logo by modifying the mark slightly, and choosing a new, more modern typeface. We created a version that includes the parish’s full name, and one with the commonly used abbreviation “OMOS.” The change is subtle enough that it continues to build on many years of established branding using the old mark, but significant enough to modernize the logo considerably. Further, the mark is much more versatile and can be used in a variety of formats. We were able to help the parish institute the the new logo immediately on digital platforms, and begin phasing it in on printed collateral.

By Shelley Johansson. Read about Shelley on our Meet Our Staff page.